It's infographic day this blog week.  This was a very broad starting point, and evoked a lot of wild brainstorming on my part.  I had a lot of fun ideas, but most of them were slashed by the practical limitations of this being the middle of a week that feels like a particularly chaotic swirl of stress, deadlines, meetings, and plans made and then broken.  Nothing serious, just enough accumulation of little things to make a nit-picky person like me nervous.

Thankfully, I have implemented a very powerful means of combating this moment in the week: baked goods. Almost all of my 'Cubicle kitchen' recipe posts come from the treats I bring each Wednesday to a coffee klatch with co-workers.  The hit of caffeine, sugar, camaraderie, and opportunity to get at least one row of knitting done at the same time is just what I need to power me through to the remaining days until the weekend.

It's been nearly two years since I started this job, and bringing in baked goods has been a part of my repertoire from almost the very beginning.  It didn't start out as something I did every week, and I didn't regularly blog about them until last year, but I have a pretty good record of my recipes thanks to this blog.  So I thought I would collate some of that into today's infographic.  Here's a breakdown of the baked goods, by type, which I have brought into work: 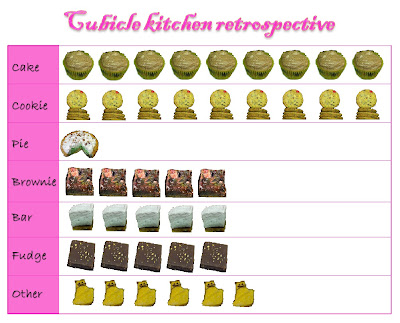 As you can see, the battle is not between cake and pie, as is so often touted, but between cake and cookie.  Cookies are obviously easily transportable, and cake, whether cupcakes, snack cakes, or cake balls, are only slightly more trouble.  Brownies, blondies, bars, and fudge, on the other hand, are great for the ease of baking.  No scooping, rolling, or cutting out.  Just pour and spread most of the time.  And then, some things, like homemade marshmallows, I just had no idea how to categorize any other way.  Pie only barely made it onto the radar in the past few weeks.  But I hope to even the score a little in the future.

Speaking of the future, I also hope to try my hand at more infographics and other fun blogging tricks like widgets.  But like the manatee that I am, I'll float my way over to them slowly.

For more posts, use the tag '4KCBWDAY3' in the search engine of your choice.
Posted by unionjgirl at 4:56 PM