I am counting down the days until Trader Joe's comes to Austin, although I know that even when they open, I will probably need to give it a wide berth in order to avoid getting trampled by other ravenous TJ fans.  In the meantime, I have some Trader's booty from the Houston and San Antonio locations I have visited in the recent months.

I always hear about how great the store brand is in particular, for quality and value.  That's why I wanted to try out this brownie mix just as it was, but I couldn't ignore my primal instinct to mix things together and try something new.  So I went for brownie bites rather than a pan cut into squares, which allowed me to break my batter into a few categories.  There were countless possibilities, but I restricted myself to just four:


Aside from getting to mix things up, I feel like I was able to do a little informal anthropologizing based on which flavor brownie bite disappeared faster.  Turns out, cookie butter is too intriguing to pass up, so that came in first place.  Caramel was a close second, though, and extra chocolate chips perhaps an expected third.  Coming in last were the demure originals, but they still made a good showing.  Or rather, tasting.  it all served to only heighten my cravings for the Austin location...this fall in Rollingwood! 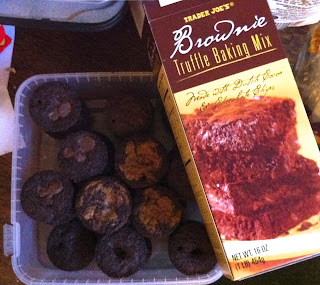 Directions:
Posted by unionjgirl at 10:44 AM