Tokyo tales: I scream for...

Amazingly enough, I didn't eat any frozen yogurt while in Tokyo.  My Google research tells me that there probably are one or two places that do the self-serve weigh and pay thing, but there were plenty of other things for me to seek out, so rather than yogurt, I indulged in some ice cream.

Whether it was served as dessert after dinner in a restaurant or scooped into a cone as a vacation decadence in the middle of the afternoon, there was not a lick of the stuff that I regret.  Here's the collage of ice cream: 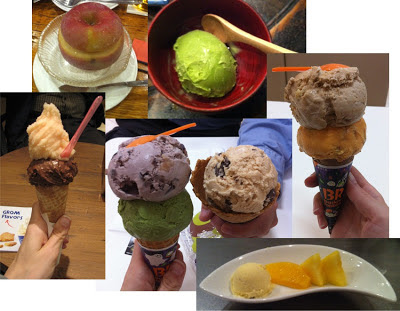 First, in the 'served as dessert' category: In the bottom righthand corner, a dainty scoop of vanilla bean to go with some fresh fruit, the finishing touch to a yakitori dinner in the hotel our second night.  The top center is a matcha ice cream that came after another dinner of grilled meats in a restaurant where you take off your shoes and sit on the floor.  After an hour or two it gets a little uncomfortable, but it's worth it for the creamy green tea dessert.  And in the top lefthand corner, that is a frozen apple which has been hollowed out and filled with an apple sorbet.  I ate everything but the very core.

And then, the specifically sought after cones.  On the left is an unabashed afternoon snack of dark chocolate sorbet topped with a grapefruit sorbet, which came from Grom in Harajuku.  You would think that after having ramen for lunch we'd have more restraint, but no.  It was delicious.

In the remaining two photos, we found ice cream in a surprising (to me) place: Baskin-Robbins.  It was next door to the Burger King that offered up the intriguing pumpkin burger so near the hotel.  As with the fast food, the novelty is in the available flavors more than anything else.  In the center photo, my cone is on the left, with a scoop of red bean ice cream atop BR's own version of matcha.  I love the strangeness of getting something so sweet and creamy from beans.  And the color is pretty too.  Dad's is in the right of the same photo, I believe it was an espresso chocolate chip.

And then in the photo on the right, another trip to BR.  A seasonal pumpkin on the bottom, and an intriguing apple pie and tea ice cream on the top.  That was totally unexpected, but really delicious.  I wish I could get that scooped in the US, because apple pie is so American and all.  The pumpkin was also surprising, because while I expected it to be like a pumpkin pie flavor, it was far more a pumpkin-caramel combo, which while unexpected was absolutely delicious.

I also bought powdered ice cream mixes for matcha and red bean flavors to attempt to make myself stateside.  But I doubt they'll be anything more than a good reminder of the true greatness of the frozen desserts enjoyed in Tokyo.  Nostalgic scoops are better than none at all.
Posted by unionjgirl at 11:25 AM

Email ThisBlogThis!Share to TwitterShare to FacebookShare to Pinterest
Labels: Tokyo