I have a tendency to take note of any available frozen yogurt wherever I am, just in case.  It's the combined result of loving frozen yogurt, and also having that ADD that comes with the iPhone age, when you're always surfing for something.  It's a habit that has come in handy occasionally, like in this case where a Groupon didn't pan out (the business came under new management and wouldn't accept the deal) and we were left wanting a little something before retiring to the hotel room for the night. 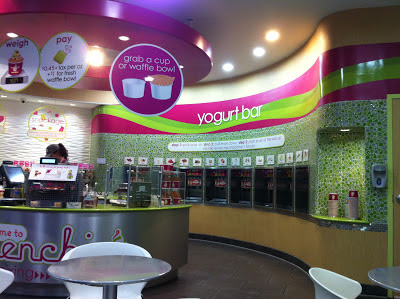 When I visited: Friday, December 21st, around 8 pm

Experience: This made me miss the Menchie's that used to be located on North Lamar next to the Central Market.  I like the flow that seems to be designed into each location of these franchises, with the island in the middle and the yogurt and toppings surrounding.  I also have to admit that I like the way this shop is more 'branded' than some others, with the cutesy merchandise and everything.  I like cute things, what can I say?  And the whole place is well-done, comfortable, spacious, and not too cold.  Which is good when you are eating a frozen treat.

But what's most important is the yogurt.  Lots of options, which is always good, and sample cups at the ready, unlike the Yogurt Spot in Katy.  However, they're version of Taro is also unlike the Yogurt Spot anywhere, and was really disappointing.  I also didn't like the Coconut, which had an artificial taste to it.

Thankfully, along with the misses, there were some hits.  I was also surprised that their Tropical Punch was pretty good as well, because that is a flavor that tends towards the artificial, and this version wasn't.  I really liked the Pomegranate Raspberry, so that was the fruity flavor that I mixed with the Dulce de Leche, which was really good, and kind of a relief after having a few caramel flavors recently that were more salty than creamy.  I also added some Gingerbread, which compared really well with the several varieties I've tried over this holiday season.  You know it's good, because otherwise it doesn't really go with the Dulce de Leche and Pomegranate Raspberry, so the fact that I included it says something. 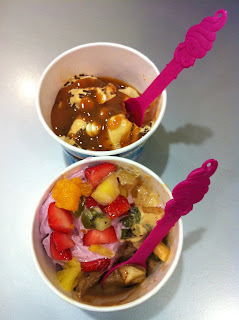 And Mom, as you can see, just went for the Dulce de Leche, with extra caramel topping.  And you can also see, the cuteness factor extends to the spoons.

Worth a revisit? If I lived in the area, sure.  Especially because it's next door to a Penzey's, and I love shopping their spices.  But most likely I'll just wait until I can find a convenient Austin location.
Posted by unionjgirl at 10:04 AM