Some holiday traditions I've had as long as I can remember.  Like the special family recipe for potato salad, which has to be prepared in the largest possible bowl and is eaten not only for Christmas dinner, but also for breakfast, lunch, and dinner again for several days afterwards until it's gone.  Other traditions are a little more new, like making the drive to Yarnorama for their holiday party.  It's only the second year we've made it, but I'm already looking forward to the third, fourth, and so on.

Preparations for this party began, believe it or not, in April this year.  That's when I bought the yarn to knit a pair of dishcloths for the white elephant washcloth exchange.  It's a fun little swap that starts off with everyone bringing a pair of dishcloths they have knit, crocheted, or woven.  Then one at a time people choose which pair they would like, except that they don't just choose from what's available.  Dishcloths can also be 'stolen' and end up being passed back and forth several times before the night is over.

In an effort to have one of the coveted dishcloths which might be stolen at least once, I made my dishcloths part of my Ravelympics/Ravellenics knitting this year.  After successfully completing my first-ever monster, I did a simple heart lace pattern for two matching dishcloths:

I'm happy to report that my efforts were rewarded with several cases of 'theft'.  In a happy coincidence, some of that demand may have been motivated by the fact that this just happened to be the same project a few of the other knitters were working on for a wedding present, so these may become a part of that project.  But I'm just glad to walk into a group of other knitters and get positive feedback for something I made.  Now I have to start plotting for next year...

I also brought with me another finished object that I'm quite proud of with ties to last year's party.  One of my Christmas presents last year was a gorgeously scrolled Turkish drop spindle from Jeri Brock, given to me by my mother to start me off spinning.  And as I reported during the Tour de Fleece, I turned out my first four skeins of yarn with that spindle and a braid of roving purchased that same night at the party.

It took a few more months for me to knit that yarn into something, but eventually it became this cowl, which I proudly wore to this year's party:

It was a completely improvised pattern of knitting, purling, YOs and picots.  It's like a fabulous collar, I love the colors.  Eventually I might be able to spin yarn with some control as to the resulting gauge, but for now I'm happy to just spin and work with whatever the results may be.  And I'm already eyeing the spinning wheels in the store.  Someday...

Being a party, it was also an opportunity to, what else, bake!  There's always a strategy to potlucks, you don't want to fill the table with just cookies, or bring anything that requires too much serving or other efforts.  So instead of regular cupcakes, I decided to switch things up and make some savory muffins.  I started with a recipe I found on Pioneer Woman, doubling that and adding a little garlic and other seasonings.  Then I took it even one step further and decided to 'frost' them with a mixture of cream cheese and seasonings, slightly thinned with a little milk.  Aren't they cute? 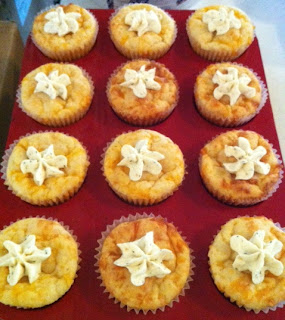 Doubling the recipe gave me a dozen full-sized cupcakes and 18 minis.  With one block of cream cheese, I had plenty for little star blobs on all of them, but if you really wanted to frost them, you would likely need a second block.  These are really tasty, but absolutely best when warm.  Also, I put them in paper wrappers just for ease of removal and clean-up, but they would have been fine without them, and the unwrapping isn't the easiest.  We have a few leftover which are going to be really good accompaniments with soup.

We made one more contribution to the party in that I brought the selection of DVDs to choose from to be the movie-viewing part of the evening.  Out of a selection of seven classic choices, the group decided on 'The Apartment'.  If you've already seen it, you may have already spotted the reference in the title of this post.  If you haven't seen it, I highly recommend it as a sweet, sometimes sad, romantic comedy set around the holidays.  You can never go wrong with Billy Wilder, Jack Lemmon, and Shirley MacLaine.

All in all, a great way to start off the holiday season!
Posted by unionjgirl at 1:04 PM