The thought occurs that perhaps the lack of posts reviewing purveyors of frozen yogurt might lead readers to assume that I have stopped eating froyo.  Allay your fears, because it merely means that I have instead been enjoying swirls of dairy deliciousness in some of the same places I've already reviewed.  And I didn't think it necessary to share every bowl with you.  Most often, I've gone to Tutti Frutti, Chill Out, and Yogurt Spot, depending on which one coincides with the shopping of the day.

But this weekend, on the way back from Kid 'n Ewe, we stopped at a place I have been to before, but just happened to predate my blogging activities.  And so, another case for the Froyo files... 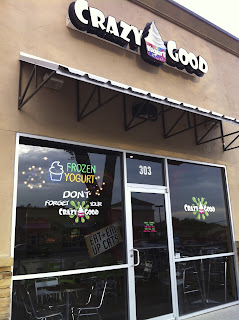 When I visited: Saturday, November 12th, around 4 pm

Experience: This is my mom's preferred froyo spot in San Marcos, and I like it too.  Aside from the one sorbet option, they also have a good Euro Tart and a Wildberry Tart.  Which is what I ended up having, because unfortunately the sorbet was fruit punch, and that just tends to have a fake taste to it.  But the Wildberry was really good, so I wasn't too disappointed. 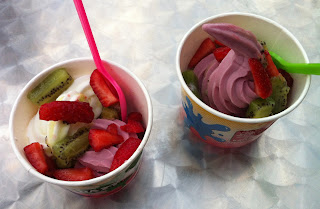 There were also two cinnamon-y flavors, Snickerdoodle, and Cinnamon Roll.  Both of those were super-tasty when sampled, but just didn't make it into my final bowl selection because cinnamon and fruit doesn't melt together well.  The Irish Mint was nice and minty.  They also had a White Chocolate Macadamia, but I'm not sure how I felt about it.  White chocolate is kind of a non-flavor when it's done in something other than actual white chocolate.  It tasted a little like how certain sweet Yankee candles smell, if you know what I mean.

I want to give a shoutout to their Dulce de Leche, because even though it wasn't swirling on this particular day, it's a big reason why my mom will sometimes visit (gasp!) without me.  And also: they have an impressive selection of toppings, particularly in the sauce category.  There was a lemon zest one in particular that was really tempting, but I didn't try it because it was almost certainly not light on sugar.  But there seem to be an endless number of possibilities here as far as customizing your yogurt and jazzing it up even if you go with a plain Vanilla or Chocolate.

Worth a revisit? Yup!
Posted by unionjgirl at 1:28 PM