Japan has so much amazing food.  Sushi, ramen, yakitori, steak.  So maybe it's a little heretical that I actually sought out fast food on this trip and ate it not once, but twice.  But stay with me here, I did have a reason.  Before this, it had been about two years since I had actually eaten a burger and fries.  So it wasn't that I couldn't survive two weeks without pink slime.  It's that there are things that these plastic palaces only put on the menu in certain places.  And I find that intriguing, seeing and tasting what has been designed for this particular place and this group of people.  It tells you something about what they eat in 'real' food.  And it's kind of fun.

Fall was in full swing while we were there, including Halloween decorations.  I had always seen Halloween as an American holiday, but I guess it's another one of those cultural exports we're sending around the globe.  But in Japan, pumpkins aren't just for carving into jack-o-lanterns or even filling pies.  They can also be put on burgers.

Burger King has a limited edition BK Pumpkin, a 'harvest time' burger, basically a bacon cheeseburger with slices of roasted Japanese pumpkin.  I believe that technically that's a squash, but let's not get picky.  I was very intrigued when I read about this, because I love pumpkin in all of its sweet forms and regularly stir a little puree into puddings, oatmeal, and baked goods.  I had also had some raw sticks of pumpkin amongst the veggies at another more traditional Japanese dinner.  And so, it was the season to try this out. 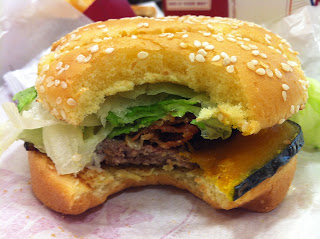 See the pumpkin?  You can also order a 'Bomb Pumpkin' to get ten slices on this, or in fact any, burger.  But I think two slices was adventurous enough.

Actually, this was pretty good.  Well, the bacon cheeseburger part was, like most fast food, not as satisfying as it smelled, but the pumpkin part was good enough to make me think that I might try and add some to my own sandwich sometime.  Something about the bacon and the pumpkin together was good.  Who knew that pairing was out there?

And then, for lunch one day, we popped into a McDonald's.  Nothing against Burger King, but for my generation at least, they just don't have that deeply, disturbingly engrained connection.  McDonald's had the happy meals, so when I think of quintessential fast food, that's where I think of going.  This is not difficult to manage, since there is one literally on every corner in certain neighborhoods, particularly in the vicinity of public transportation.

And each of these locations, unlike the locations in the US, has an Ebi Filet-O.  Basically, it's a shrimp burger.  Shrimp ground up into a patty, coated with Panko and fried up, with lettuce and a sauce derived from Thousand Island. 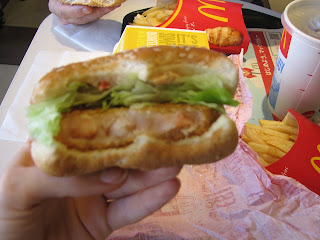 I think this was more interesting, just because it was a completely different kind of burger.  Again, it was still fast food, so it could have been better, but I would eat another if I found myself locked in a McDonald's around mealtime.  And again, it made me want to try it myself at home, though I'm not sure I want to actually fry it, and I'd be worried about baking it and overcooking the shrimp.

There you have it.  Japanese fast food.  And if you're ever there, make sure you ask for ketchup at the counter, otherwise you're going to have to eat your fries naked.
Posted by unionjgirl at 4:58 PM

Email ThisBlogThis!Share to TwitterShare to FacebookShare to Pinterest
Labels: Tokyo