It's so hard to know where to start in regaling you with tales of Tokyo.  But I suppose all of the best things start with a nice cup of tea.

I'm currently in a tea-themed swap on Ravelry, so it was on my mind throughout the trip.  I had a few ideas for places to find a few bags, but funnily enough, my favorite find came once I was in Tokyo.  The first day we had to wander around, my dad and I went to a department store that mostly carries electronics, but also had a floor of books and magazines.  I love Japanese magazines because, apart from interesting fashion editorials, they tend to come with fun freebies like little tote bags.  While browsing through these for the best free gift, I found one magazine that was more like a catalogue for a Karel Capek tea shop.

For those who don't know, Karel Capek was a Czech author.  He's most famous for coining the term 'robot', but I think he's worth reading for more than that.  For example, The Gardener's Year is a short and sweet little book that is hilarious for those with or without a green thumb.  Though he's not a household name, he apparently made enough of an impression on Utako Yamada, a Japanese children's book author and illustrator, to name her tea store after it.

Now in it's 25th year, there are multiple locations around Japan, mostly in the Tokyo area.  I decided to venture out slightly to Kichijoji to visit the original.  It's a few stops by train outside of the city center, and there's also a great yarn store here (more on that later).  Getting there is like getting anywhere in Japan for a foreigner.  It requires a some research and a little luck.  Their website provides a little map sketch for each location (this is the translated page for Kichijoji), which when combined with an additional map of the area gave me a sort of idea of where I was going, several blocks from the train station.  Mostly, though, it was luck that had me turning onto the correct streets.  And thankfully, on the corner of the final street there was a building with a sign for ASA, which was also on the online sketch.  After walking half a minute I spotted the telltale signs. 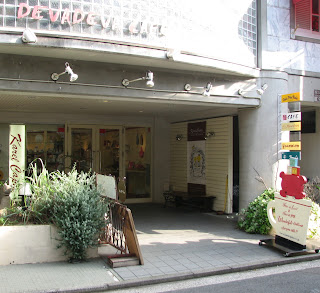 Inside it was positively bursting with teas that each smelled delicious and had the most precious packaging ever.  Plus, you are greeted with a small sample cup of tea and half a biscuit to snack on.  I tried Milk Caramel, and it was so good. 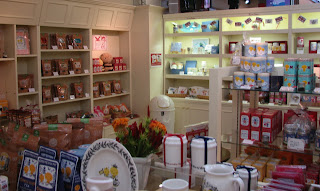 It was so hard to decide what to bring home with me.  The mugs were lovely, but I knew that they wouldn't be the easiest things to pack.  Plus, the tea was expensive enough on its own.  In the end I settled for a sort of sampler pack with about a dozen flavors, and a reusable shopping bag.  I should have gotten one or two more, because they were the best deal and are a very cute way to remember the store.  I plan on carefully cutting the tea bags for later display, because the illustrations are worthy of wall space.  They also have a lot of really cute brochure and catalog things.  Really, this is a feat of merchandising genius mixed with good brew.

In search of more bags, I tried to visit their location in Ginza, but unfortunately it was being renovated at precisely the time I was in town.  I did find them again in Jiyugaoka, after a lot of wandering around with no idea what I was looking for.  They didn't have any bags at this location, it was a bit smaller, but they did have another flavor of tea, Marron (like a chestnut, seems to be a popular fall flavor here) so I decided to splurge and get a tin of this one.  I've brewed one cup of it so far, and it's very nice.

It's going to be tough drinking these teas knowing that I can't really get any more, but I'm going to try and just enjoy what I have and hope that online ordering becomes easier.  Until then, happy memories and a few aww-inducing photos like this one. 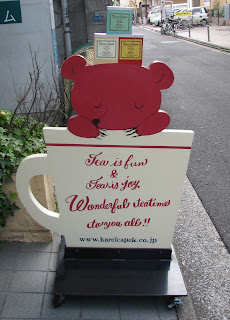 Posted by unionjgirl at 6:30 PM