No slice left behind

October is apparently National Pizza Month.  I didn't know this yesterday, all I knew was that we had a lunch meeting at work and while I diligently ate some cheesy cauliflower, there were some slices of delicious, devilish pizza left as we were wrapping things up.  And so, along with collecting the remaining treats that I of course brought, I also snagged two slices to take home for later.

Saving things for later has turned out to be one of the best strategies for avoiding temptation.  If someone brings in donuts, I take one and put it into a Ziploc to bring home with me.  If I have the calories after dinner, I enjoy it for dessert.  Or maybe by the time I get to that point, the sugar and calories have lost their allure, and I don't eat it at all.  Yes, it's a little wasteful, but I would rather waste a few donuts than 'waist' a few donuts.  I had to go for the pun there, I'm sorry.

Something else I might do with that donut or other saved treat, is work it into something else.  Before now, I've given a cupcake the french toast treatment, and I suppose the savory version would have been some kind of pizza frittata.  But for a faster version, I made something more akin to an omelette.  It's all done on the stove top, and comes together in just a few minutes.

I hesitate to write this up as a recipe, because it doesn't look like much, and it's honestly super-simple.  But just for the sake of formality.... 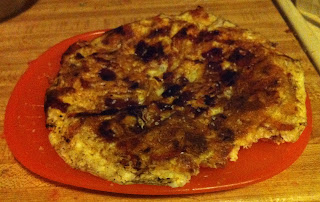