I wasn't sure what to call these at first.  The original recipe is for a snack cake, or I could have said they were muffins.  But these turned out more dense than either of these terms implied. Truffles seemed like to fancy a term.  And so, since these are made in mini-muffin cups, I went with the texture-neutral 'bites'.

And these are some tasty bites.  I made a few changes from the original, replacing some of the white sugar with brown, using non-fat Greek yogurt rather than sour cream, and changing the nuts and adding white chocolate.  Most of these were just for the heck of it and based on what I had on hand.  The white chocolate was salvaged from what had seized up in the making of the cake balls the week before.  Never throw out seized chocolate, it can be saved, either by chopping it into something as chips, or melting back down into something like brownies.  You can't make it pretty again, but you also can't keep it from being tasty.

Because of the alterations, and because they didn't look like the original recipe, I was worried about these.  But yet again I was reassured that in fact, chocolate, pumpkin, and pecans are tough to go wrong with. 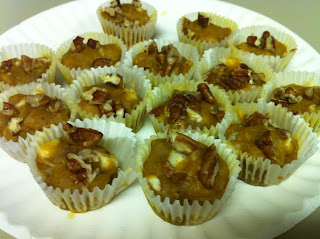