One of these days, I'll be brave and bake something that involves yeast.  But today is not that day.  Today is the day that I share a recipe for cinnamon rolls for those of you who, like me, still life in fear of the fermenting and the gases and the rising and the proofing.

What I love about these kinds of semi-homemade recipes is that having eliminated the fear that the finer points of the science will work, you are left with the art of experimentation by using the ingredients you have on hand.  I made a few substitutions to these minis, even though I maintained the original flavor.  After making these once, I can't help but imagine all of the possible flavor variations.  Like dried cranberries and orange zest instead of raisins and cinnamon, or dried cherries and cocoa.  I don't suppose they make chocolate crescent dough?  I'm disappointed in you, Doughboy.

I may not be a fearless yeast master, but I can still make some tasty treats.  And in the meantime, I have other things to be proud of: I ran two miles in the afternoon heat today after getting home, and last week while I was running on the treadmill at the gym I answered a Final Jeopardy question correctly!

Yeast should be shaking in its boots... 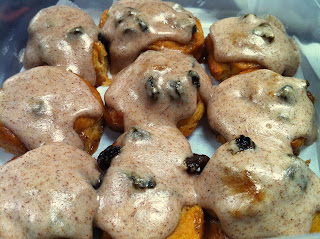 Posted by unionjgirl at 4:47 PM