I was surprised earlier this week to read in Cupcakes Take the Cake that the cupcake chain Crumbs had closed the doors of all of its locations permanently on Monday.  I wasn't keeping close tabs on the company, but I did know that they had gone from heady claims of opening locations all over the place, including as nearby as Dallas, to seemingly retreating back to the East Coast.  But I think everyone, including the employees, were shocked to hear that they were going to go from dozens of locations to none in a matter of hours.  And so, I offer you a eulogy* for Crumbs.

I can't tell you that Crumbs had the best cupcakes.  They didn't, and likely suffered from the increasing quality of smaller competitors as well as over-expansion.  But they were my first experience with gigantamous gourmet cupcakes.

It all began on my first trip to New York to visit Sarah Lawrence College as a prospective student.  We stayed in the city to be tourists apart from one day's expedition to the campus a few train stops away.  Along with a whirlwind whip around the city, taking the Staten Island Ferry past the Statue of Liberty and going up and down the Empire State Building twice, we stopped in what was then one of just a handful of locations around Manhattan.  I had a Red Velvet cupcake, taking a photo to show just how enormous it was in comparison to my face.  The combination of cream cheese frosting and college dreams made Crumbs part bakery, part symbol for me.

Sure, Sex and the City made Magnolia the go-to place for miniature frosted cakes, but I was several years behind the uptake on that show.  I didn't watch it until my first spring semester at SLC (yay for dreams achieved!) when my roommate arrived with the complete DVD set.  Then Sprinkles took over the West Coast, and the founder judges an entire competition show on the Food Network devoted to them.  Every other food trend report seems to declare the end of the cupcake trend, making it so frequent a topic of conversation that it seems impossible that it will ever really be true.  Every 'new' cupcake, whether it's doughnuts or pies or macarons, never reaches the same frenzied peak as the cupcake did, and never even really surpasses the cupcake's current numbers.  And so they continue to be the reigning treat in the bakery, constantly inspiring new and delicious creations.

But for me, Crumbs cupcakes were the treat that I indulged in when I went into the city on the weekends.  I was never a very wild, party-going person, so my adventures in the city generally involved Strand Bookstore and cupcakes.  Sometimes I would even buy two and haul one back to my dorm room for later.  And they were the amazing gift a Ravelry friend brought me from new York when we met up near Dallas, transporting them in her carry-on just for me.

So even though I've discovered some tastier cupcakes here in Austin at Sugar Mama's Bakeshop and Toot Sweet, and even though I bake my own cupcakes these days more often than I ever buy them from someone else, there's always going to be a place in my heart and stomach for Crumbs. 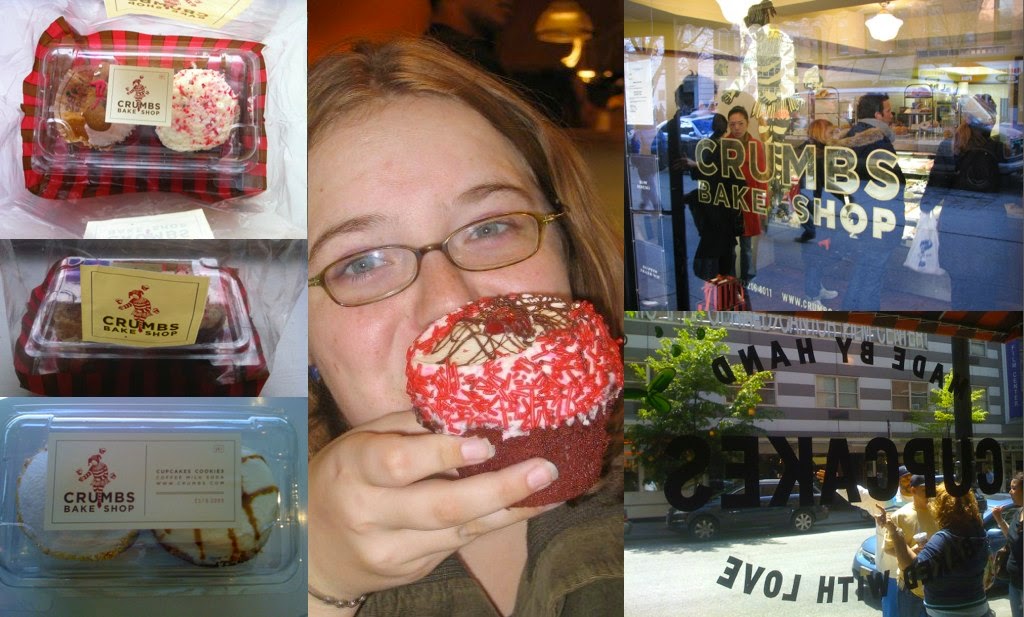 *Now, according to Cupcakes Take the Cake again, there's word that the CEO is going to infuse some cash into the company and get it reopened.  Since they're coming back from the dead, maybe they can capitalize on another trend and turn their brand into...zombie cupcakes!

For more (and probably healthier) inspiration, go to Woolen Diversions.
Posted by unionjgirl at 1:55 PM