Two things happened to me on Monday when I finally bought my ticket to New York for the end of the month:

Not much has changed since last week in terms of my progress towards the move, other than plans coming together in my mind.  I still have a few days left at my current job, so I'm trying to keep my head in that game just a little bit longer.  Then I can focus on how best to fill my boxes with my spinning wheel, baking equipment, bedding, and every last thread of possible warm clothing that I own as a Texan.

One of my other goals before I leave is to finish my Vlad Helsing Shawlette.  Because blocking mats are not currently on the top of my prioritized list of items to have with me, so I want to be able to finish and block this thing before I go.  Plus, then I can show it off at my new job and establish my crafting cred. 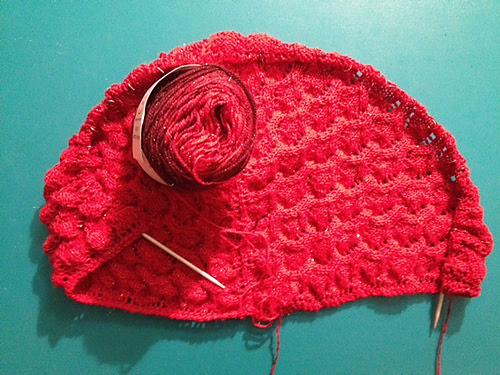 Check out that mad lace work, yo.

I've also been working on Head in the Silk Clouds, but it doesn't really progress that interestingly.  It just becomes a bigger triangle.  I love the way it's working up, though, and it is super-simple for mindless knitting.

I also cast on a new project this week.  Because, not to bury the lead, but we completed the Hill Country Yarn Crawl over the weekend.  Fourteen official stores, one nearby that we also decided to visit, and a yarn dyer's studio.  And it was at that yarn dyer's studio, Alisha Goes Around, that I picked up some yarn for a project that I needed to swatch and cast on for ASAP, just to make sure I didn't need an additional skein. 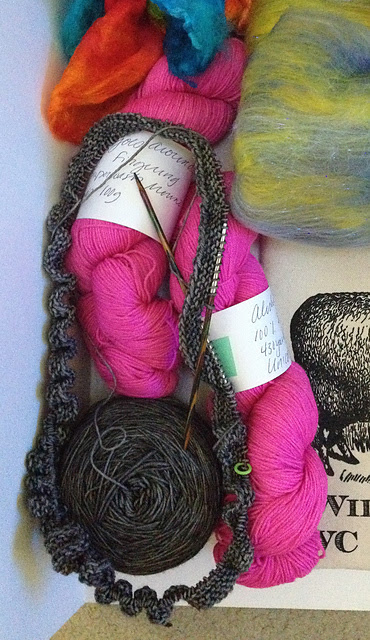 If it would take more than a third of the skein, Alisha advised me to get another.  Thankfully, things look promising that I only need what I have.  So I guess this will be my next 'thinking' project after Vlad.  I'm calling it Caged Pink Monster.

There are other new projects in the works for my crawl haul, which I'll have to share in later posts.  Let's just say, I have plenty of soft packing material to protect everything I'm shipping.  Who needs packing peanuts when you have yarn and fiber?
Posted by unionjgirl at 6:25 PM