Do you know what separates the casual frozen yogurt fan from the true devotee?  Winter.  Sure, it's all good fun when it's hot outside and a cool treat is a welcome break.  But what about when the temperatures drop?  When you could keep your bowl of self-serve outside without it melting?  Some people probably don't eat frozen yogurt between the months of November and February.

I, on the other hand, was looking forward to combining a trip to the movies with a trip to Yogurtland last weekend.  It was a tougher journey than I had expected.


'Philomena' is a British film starring Dame Judi Dench and Steve Coogan that's gotten a little bit of press and had some advertising push behind it that I've seen.  Even so, it's not a movie that you'll necessarily find in every theater.

Thankfully in Austin we have several options for independent, smaller release movies like these.  Like Regal Arbor, which just happens to be up in North Austin, near Yogurtland.  Why yes, I will use any excuse to get some of their tasty flavors.  Unfortunately, there was some kind of electrical issue, and they were closed.  So we tried to go to a place across the street, which never gets a fair shot because we like Yogurtland so much.  They, though, thought it was too cold to stay open.  Okay fine, so it stayed below freezing into the afternoon and overpasses and bridges were a little icy.  But I needed froyo!

After a moment of panic, we discovered that Yogertz was located practically next door to the movie theater, so I wouldn't have to settle for buttered popcorn to get me through the movie. 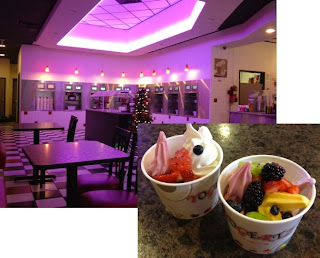 I've fallen off of the 'Froyo files' wagon lately, but I'll just take this opportunity to tell you, Yogertz is pretty good.  Very creamy and smooth, with 14 flavors to choose from, and all of the nutritional information is up on little LCD screens for each one instead of just a laminated flavor card.  There were two sorbets and two tarts, both of which were really tasty, and even the non-dairy tarts were almost creamy.

So after that yogurt break, back to the movie!  It was a really well-done movie.  Of course, I expect no less from Dame Judi, patron saint of wonderfulness.  It's a very straightforward kind of movie, not to say simple.  It's based on a true story, the gist of which you can get from the trailer.  There are some twists which could be sensationalized, but they aren't, it remains a very quiet but emotional movie anchored solidly by Dench and Coogan's performances.

It might not make you feel so great about nuns, though.

Would you eat frozen yogurt in freezing weather?  Or have you seen any good movies lately?  For more Movie Madness each Monday, go to Amaryllis Musings.

Posted by unionjgirl at 3:41 PM